This blog comes from Shane McPherson whose research focuses on the ecology of the urban Crowned Eagles. How do they survive, even thrive, amongst the urban environments of Durban and Pietermaritzburg. Shane is based at the University of KwaZulu-Natal, to find out more about his work, go to: www.kzn-ce.blogspot.com to hear more about his time in the Cederberg, read on:

So here I sit at Ashanti Backpackers in Cape Town.  A grey windy and wet day to write while passing the time, reflecting on the last ten days of bliss.  This was a self-inspired trip to visit The Black Eagle Project, PhD research initiated by Megan Murgatroyd.  Megan is now in the third field season of research comparing land use and productivity of the (relatively) pristine population of the cederberg Black (nee Verreaux) Eagles, and the eagles of the Sandveld which are living next to lands with extensive agricultural transformation.

On the 6th of September (happy birthday to me!) I flew from Durban to Cape Town, and boarded an evening supersonic taxi to Clanwilliam.  Megan met me here at 10pm and we began the hour-long drive to the field site, the gravel road endlessly evolving in the headlights.  Arriving at night meant I had no idea what landscape to expect in the morning.  On the first frosty dawn, the sun peaked over the eastern mountains and slowly warmed the valley.  The field house is part of the Driehoek farm, passionate sponsors of Megan’s research and, surrounded by the Cederberg Wilderness Area, perfectly situated for access the study site.  Driehoek is a great place to set up camp on one of their camping/caravan sites if you’re inspired to come and visit. 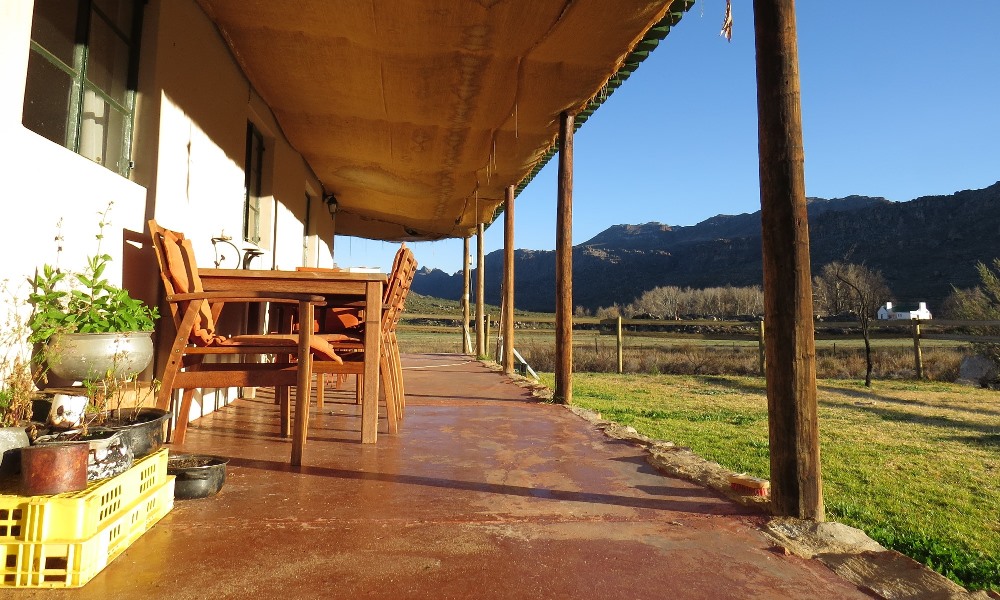 Spring comes to the cederberg now.  And the flowers were beginning to bloom.  To the south the fynbos dominates, and to the dryer northern slopes different colours representing succulent karoo. Mountains loom over the colourful valleys with tiered expanses of cliffs and crags providing an abundance of nesting opportunities for eagles and other raptors.  We spotted plenty of kestrels and booted eagles, and despite their absence no doubt the cliffs would be full of peregrine and lanner falcons as well.  In the river valleys, reed beds provide all that a Black Harrier would need, and the old oak trees around the homesteads also home to a Black Sparrowhawk.  I noticed a theme here - so I dressed in black every day - there must be some reason it works so well for mountain raptors. 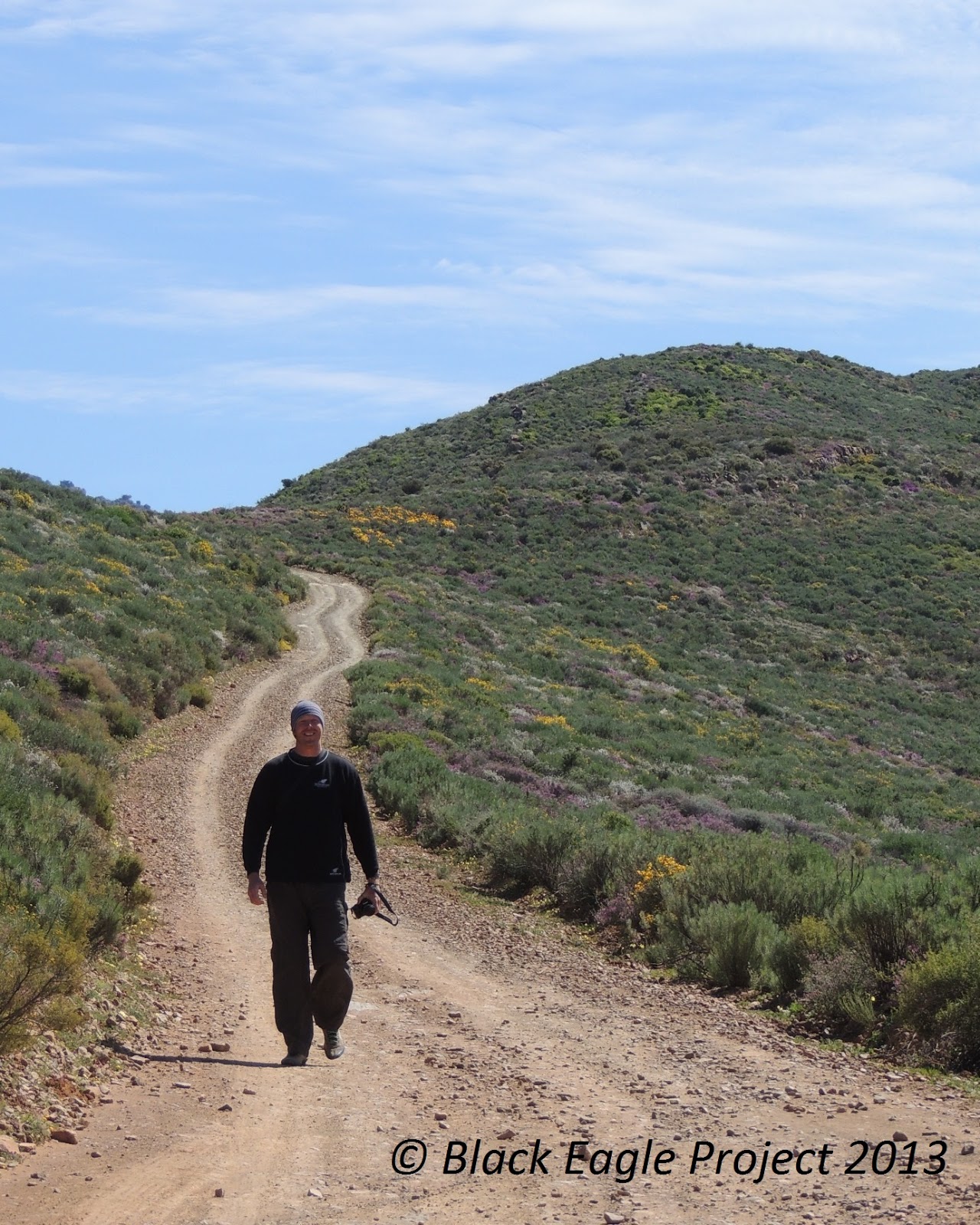 While most of the nests in the cederberg have not bred this year (for reasons to be determined), we set out each day for short walks to nearby nest observation sites.  Invariably each site had some sort of eagle entertainment to watch.  On one occasion during the 1 hour watch, while being amused by the wing-flapping exercises of the eyass, the pair of adults appeared over the top of the ridge.  While one adult descended to the nest site to deliver fresh prey to the waiting chick, the other coming from an unknown location, tucked into a steep glide, building up speed and rushing by just 30 meters from us, before continuing out over the deep valley beyond.  At another site, the pair cautiously checked these bipedal intruders into their territory, drifting back and forth in front of the nesting cliff in the most majestic style before coming to perch together on a distant ridgetop buttress. 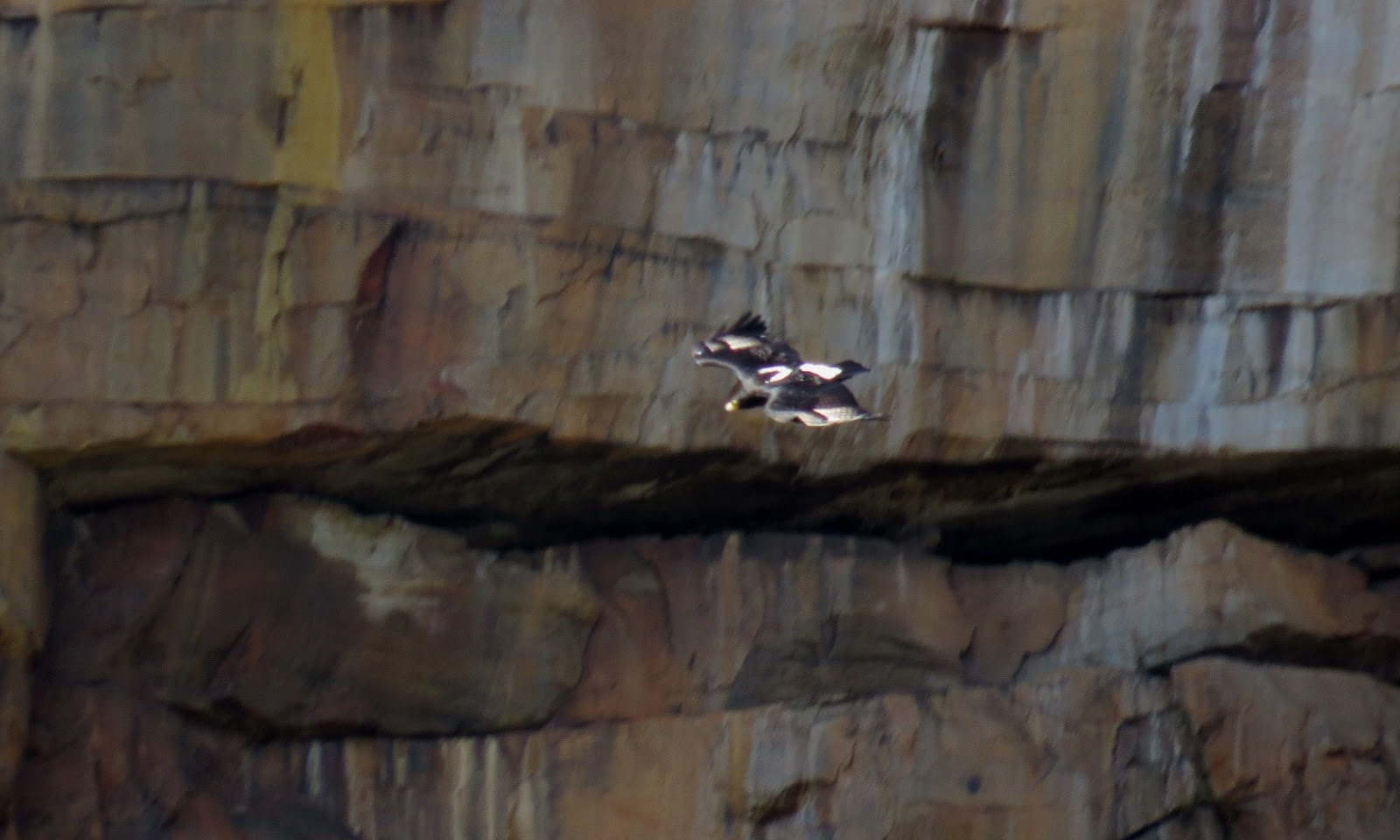 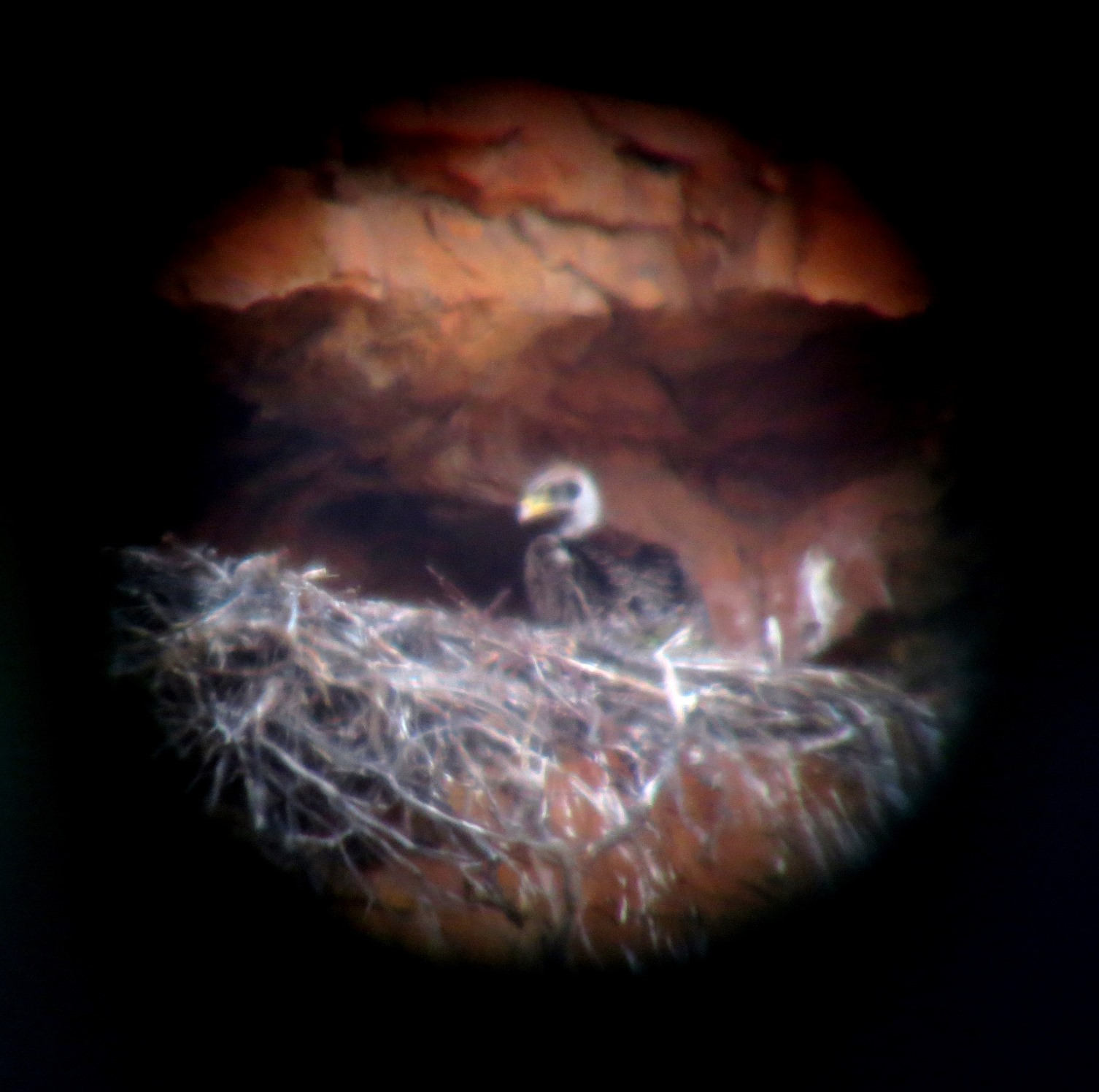 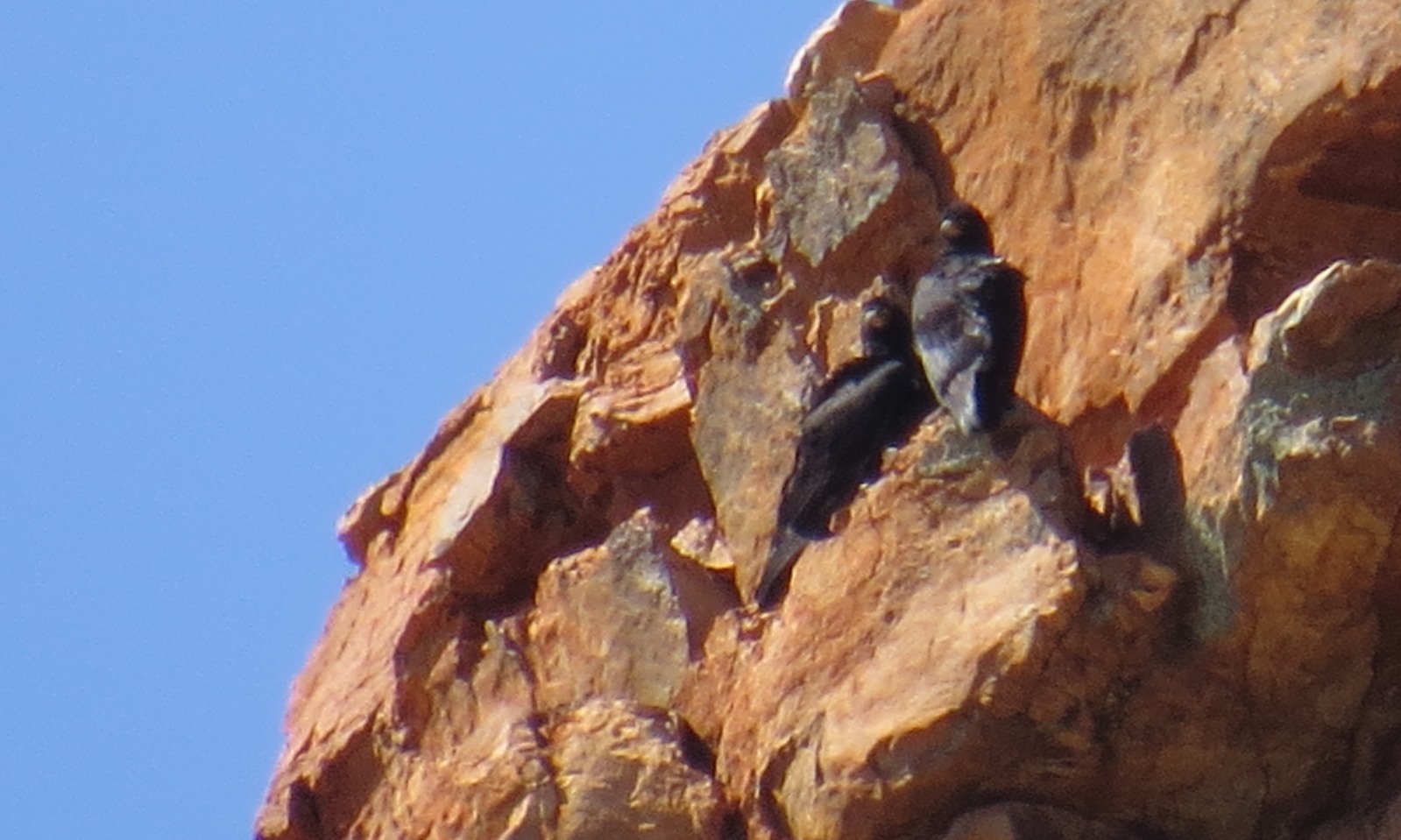 Three active nests were visited, including one that was a new discovery for the season – a site that takes an hour of bone-rattling driving and then a short hill hike to get to.  The bakkie ‘Ratel’ has done some rough miles over the last few years, and there have been countless flat tires to fix.  It takes guts and mettle to face these boulder strewn slopes, and trek miles through them day after day searching for nests.  And mettle Meg has in spades, attested to by a titanium pin, the result of a compound fracture while boulder hopping a stream early on in the project.  To strengthen the ankles again and blast through another two seasons is testament to the determination and passion for the Black Eagles. 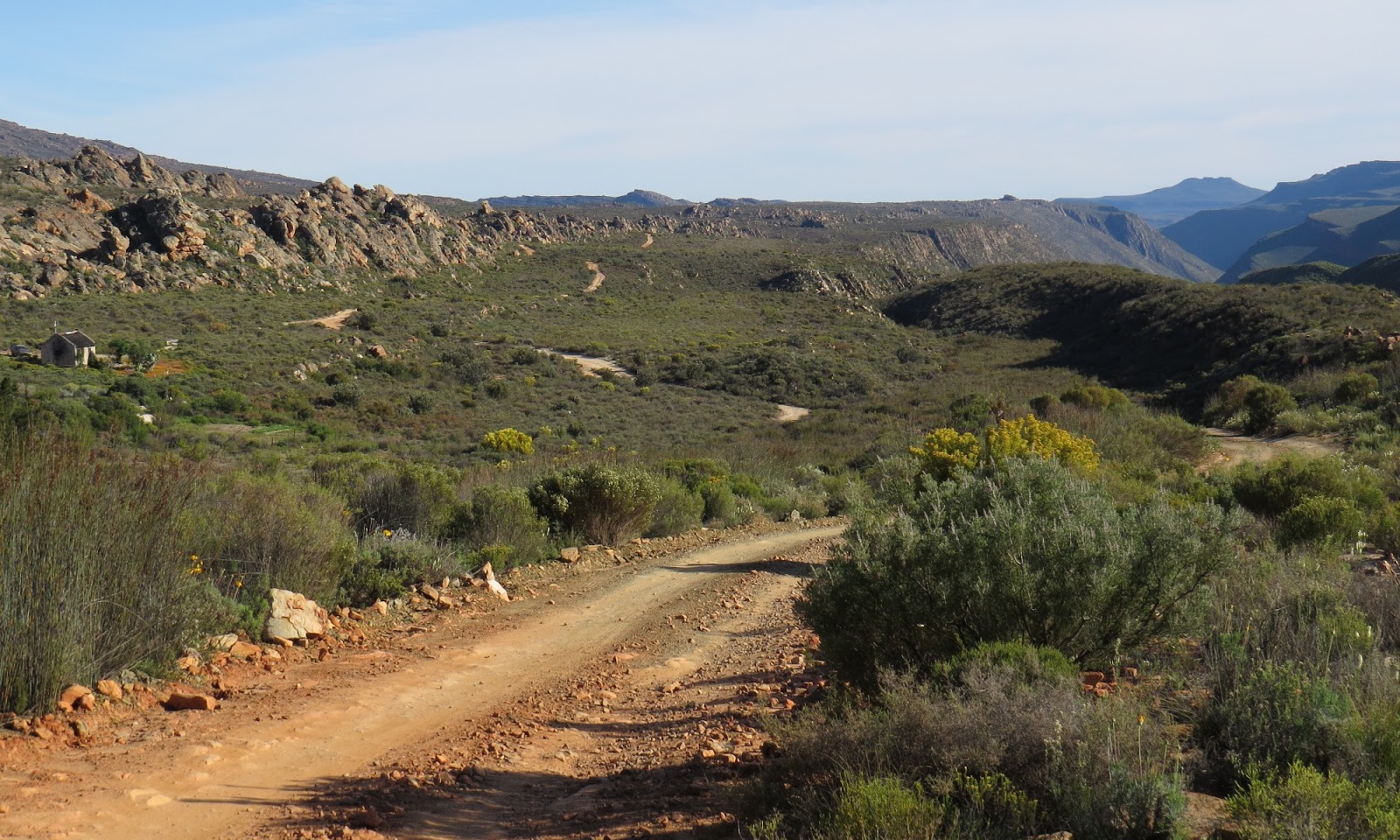 Happily, there was something useful I could help with.  On day three we set off early towards Tafelberg, the second highest summit in the range.  Up on the last plateau before the summit sat a VHF relay station to download GPS tagged eagles - this had been pounded by recent storms, the unit was silent and the aerial broken.  So after a 2 hour uphill hike (passing a lifer, a pair of Cape Rockjumper’s on the way), we reached the base station, stopped for lunch, admired the scenery, and then loaded the equipment, Megan with the batteries and downloader and I with the 9 ft aerial, descending back to the field base.  A few days later I was to get another remarkable perspective of Tafelberg peak. 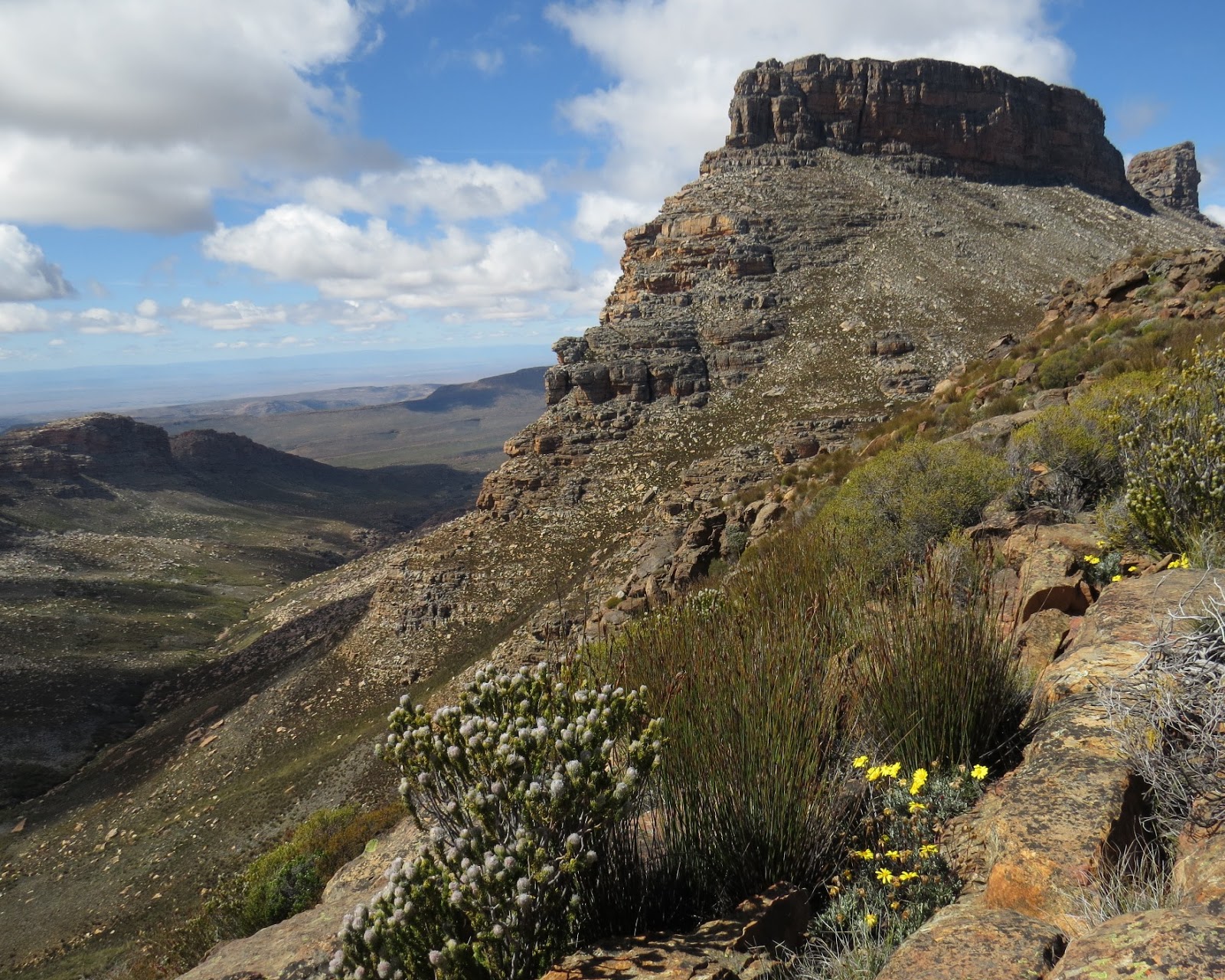 For some weeks Megan has been preparing to repeat the helicopter surveys that proved so successful last season.  The 2012 helicopter surveys were in November, when many nest had fledged, this year the surveys were timed earlier to be able to locate the nests while chicks were still at home. Unfortunately, September surveys coincided with the aviation students’ exam time, and there were limited numbers of pilots and budgets available to fly the crags of the cederberg, cutting down on the previous years available flying time.
On Wednesday evening, the two two-seater R22 ‘matchbox’ helicopters arrived.  They were covered in their blankets for the night.  The sun peered over the ridgetops the next morning and gradually softened the frost.  But the helicopters were hypothermic after such a cold night.  Theres something disconcerting with helping jumpstart toy helicopters that we’re supposed to be airborn minutes later, moreso when one of them refuses - having blown some electrics around the solenoid or alternator.  Without power for the radio’s and gauges the pilots decided that it should stay grounded until the flight back to cape town airport. So down to one helicopter for the survey. 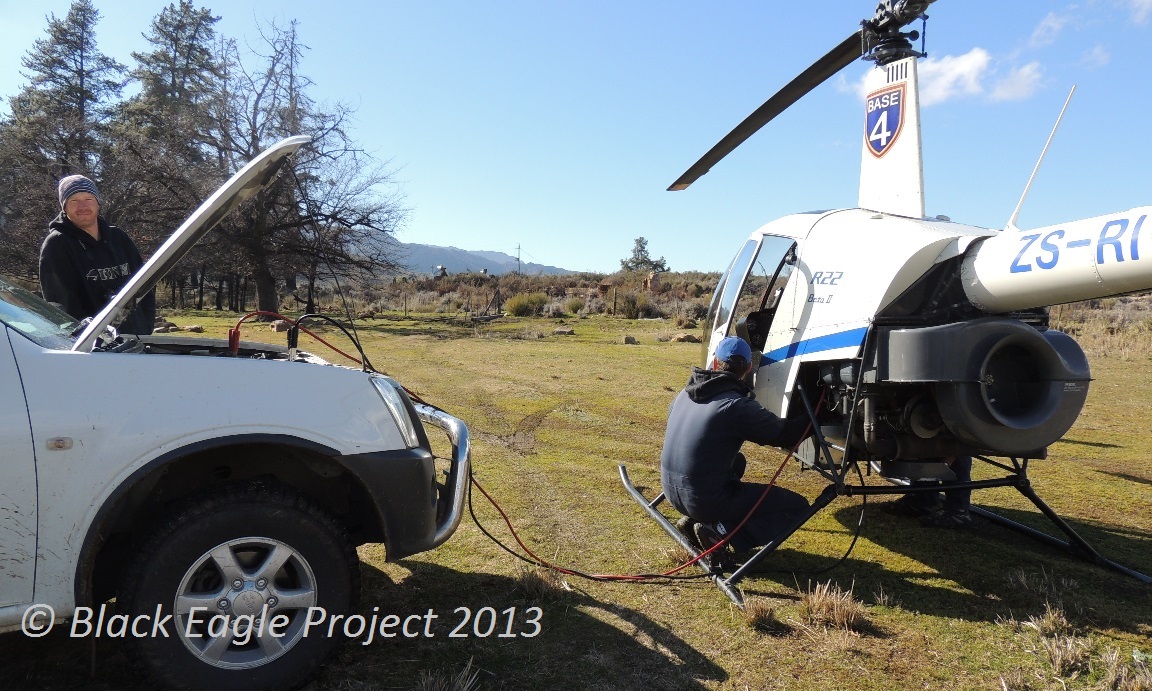 Happy with the jumper leads, the second chopper roared to life, and the first flight was up and out by 9am. Megan logged four flights, surveyed 28 nests, and added three new nest sites to the known population!  Incredible success for five hours airborne.   Then as 4pm rolled around, there was one hour left before sunset, the chopper refuelled and Megan offered me an opportunity to fly a transect.  Taking a direct line over the Tafelberg neck where days ago we’d hiked 2 hours up the mountain, in 7 minutes we crested the ridge, and descended to the other side, passing the Die Hoek nest site that takes over an hour to drive to.  Passing over a waterfall, another plateau and then into a cavernous gorge on the Tra-tra River.  After taking several runs at gps marks on tiered cliffs, it was quickly apparent this was no walk in the park – despite being just tens of meters from the cliffs. Eventually, I spotted one of the sites, apparently recently used but definitely empty.  And all too soon with fuel and sunlight running out it was time to turn tail and head back over the ranges to base.  We passed by the Tafelberg neck again just as the setting sun poured red light over the rust coloured rocks. 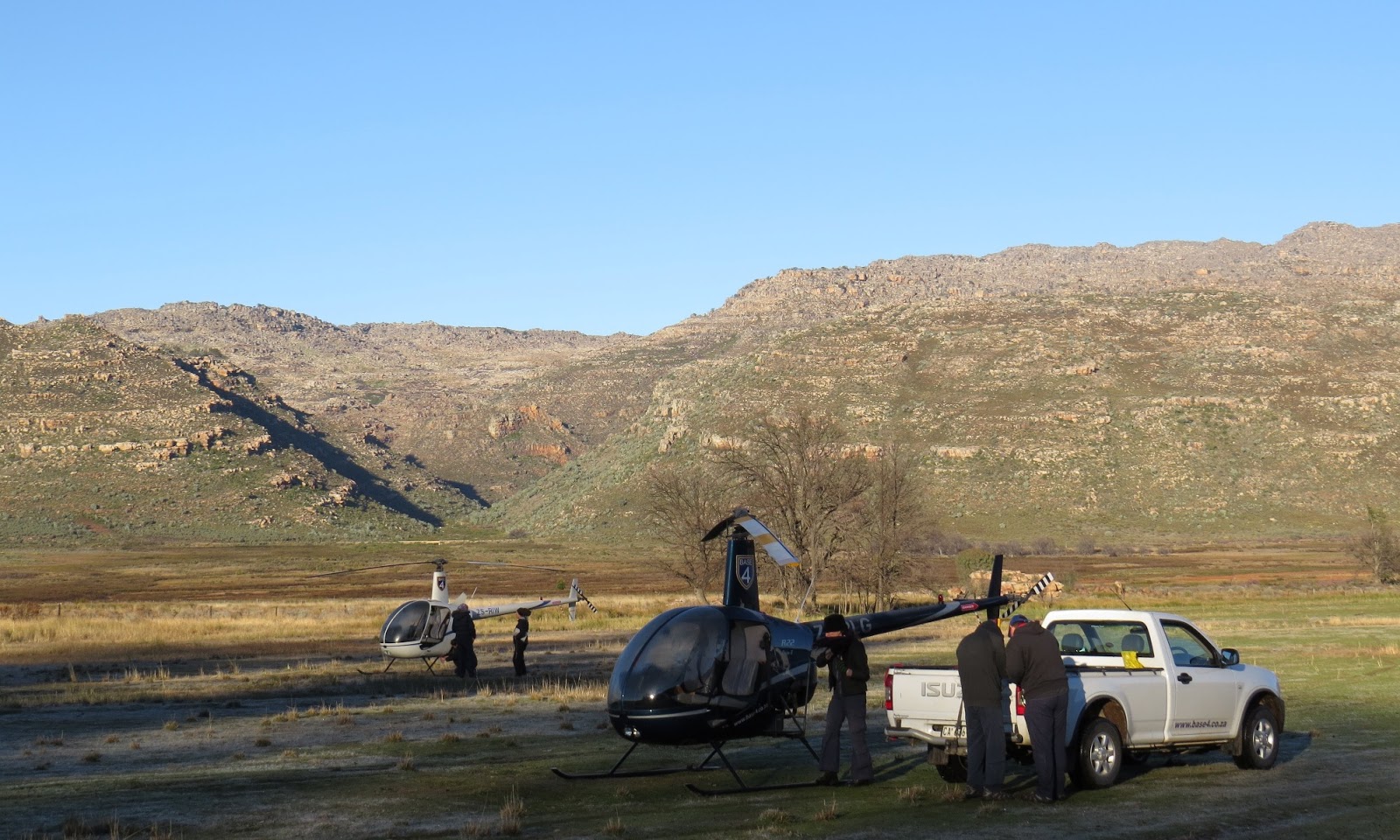 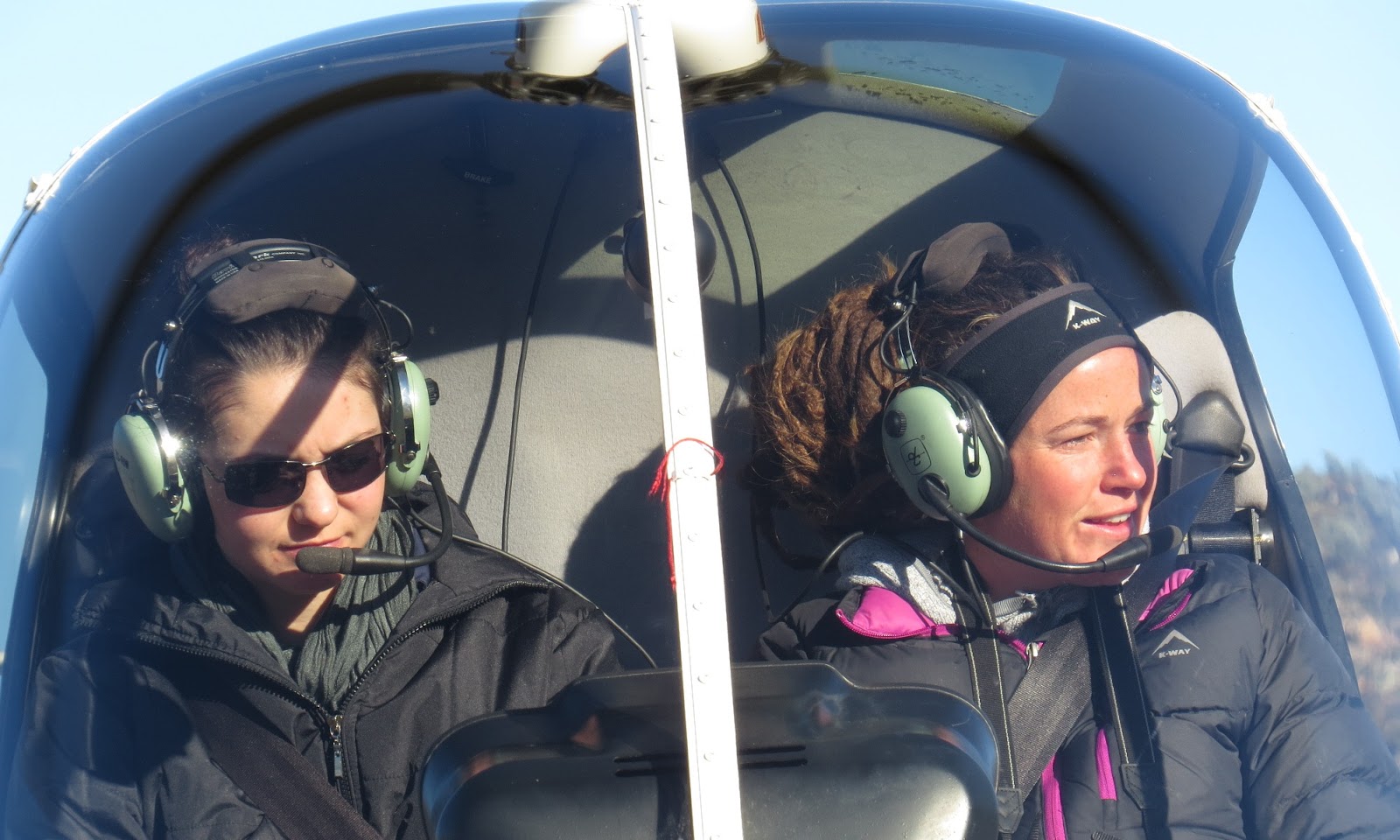 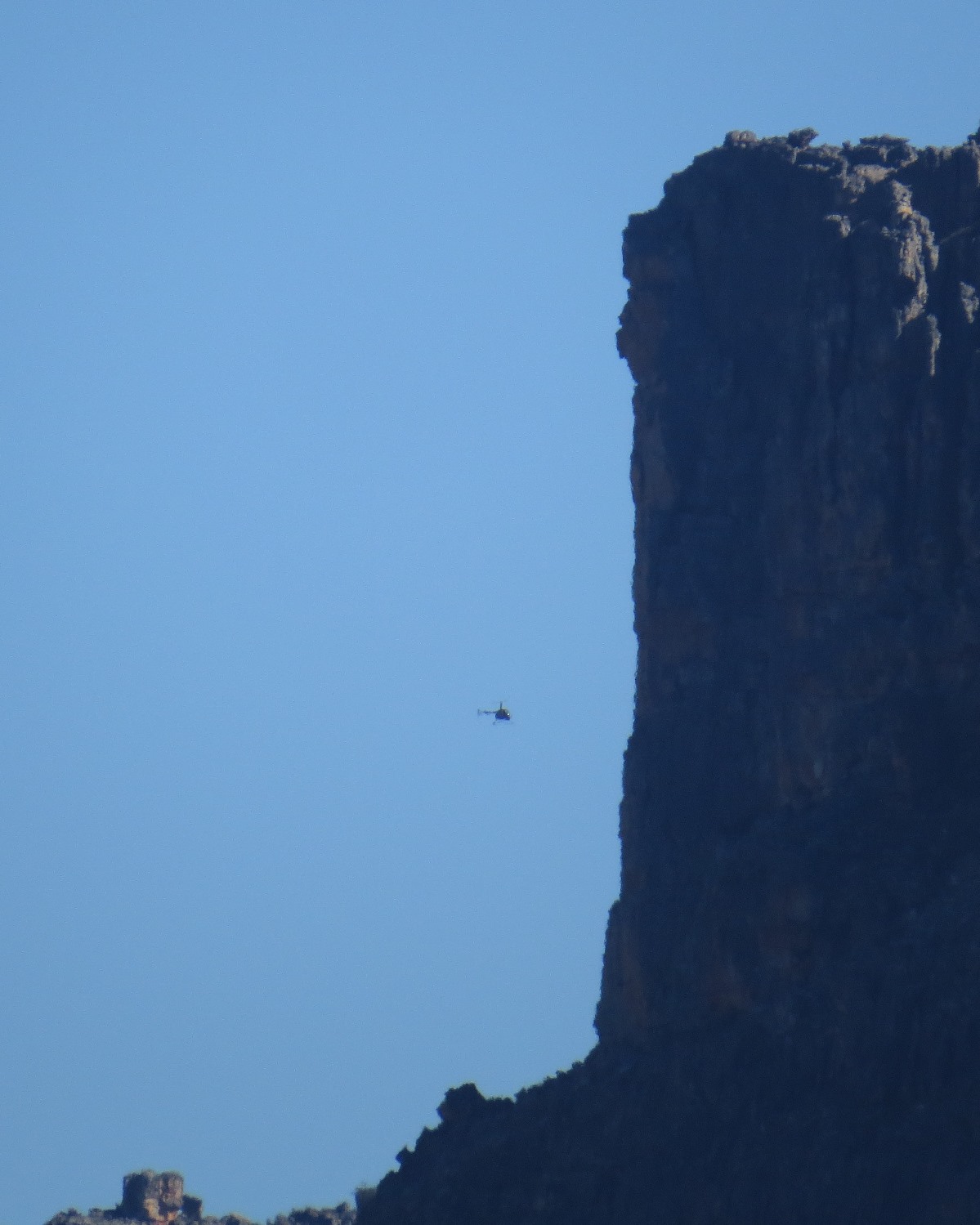 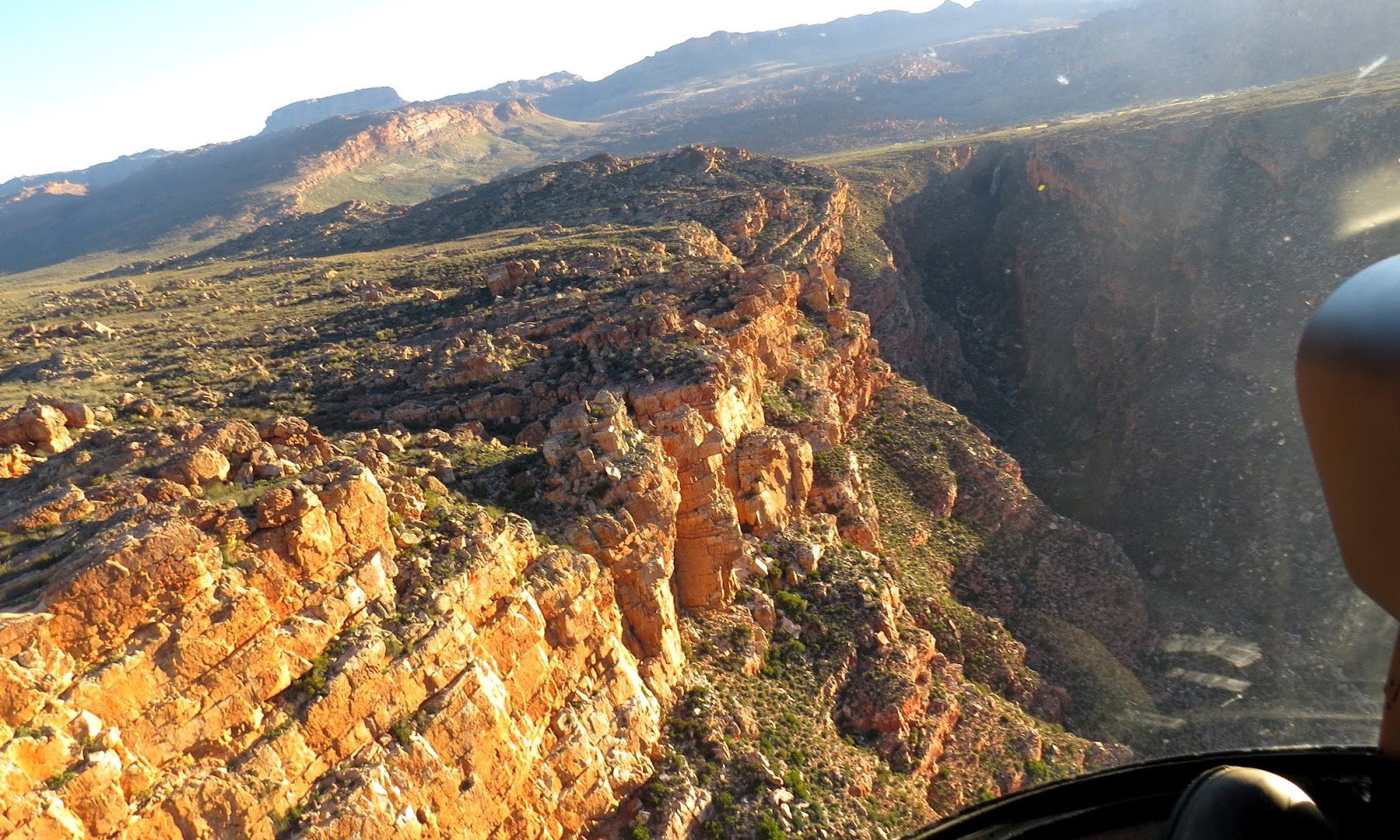 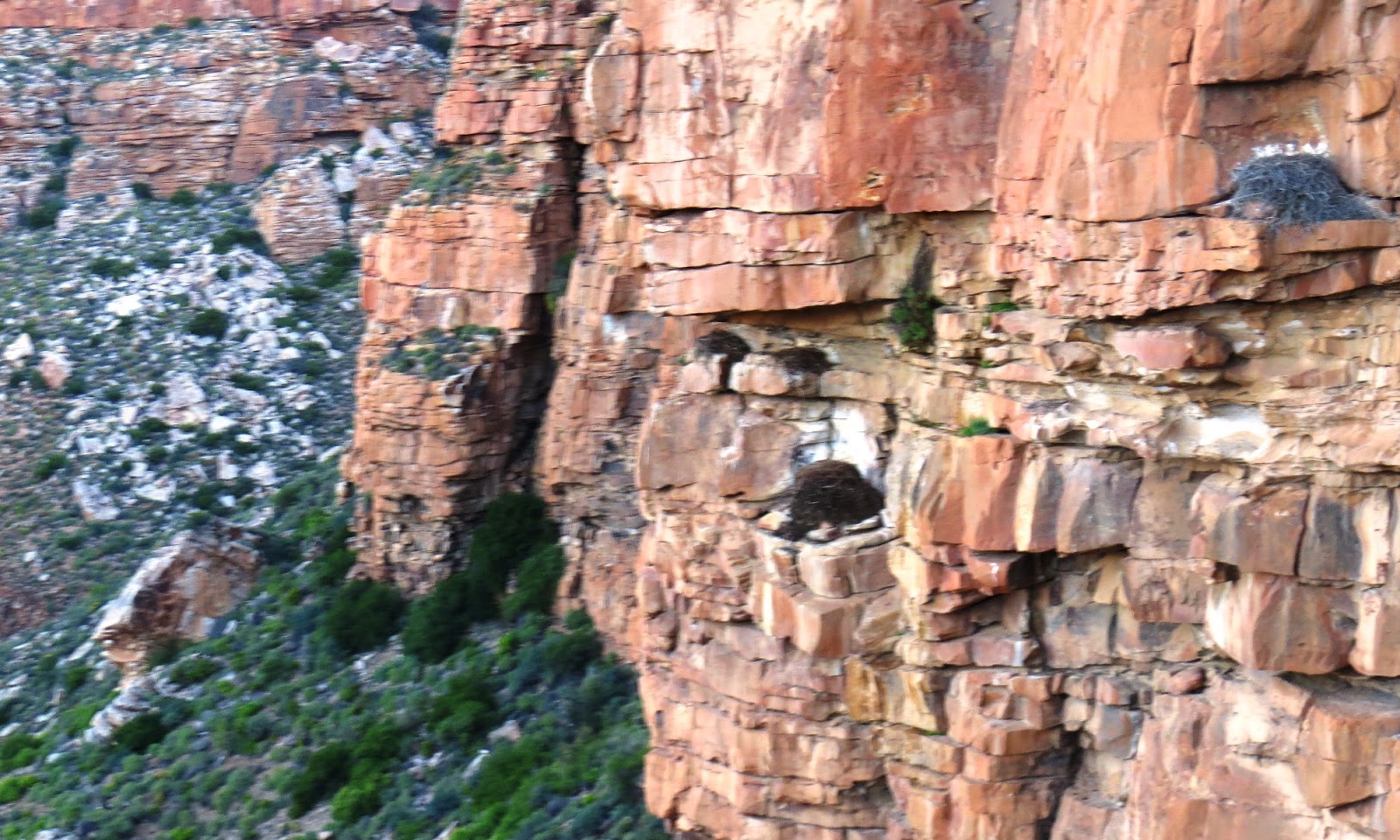 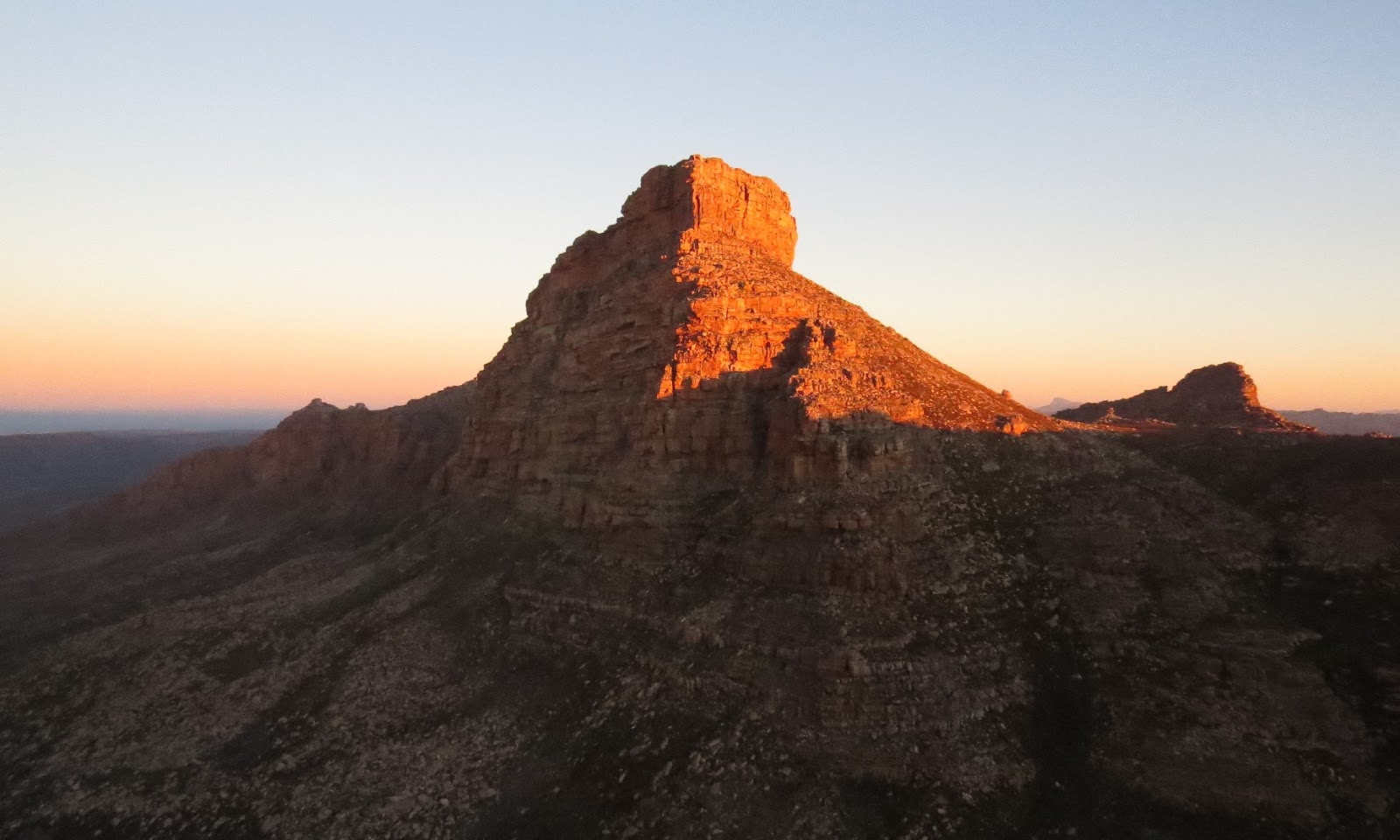 The following morning, rolling clouds and high winds forced the pilots to beat an early departure from these changeable mountains, flying in tandem back to CapeTown so the bird with the radio’s could get ground clearance for the crippled craft.  Meanwhile Megan and I walked to Uilsgat Rock to sit under an old bushman shelter, with weathered rock art, the old bushman's shelter was a great place to chill and maybe see a pair, despite an inactive nest this year.

After eight days of blue blue skies and softly winds, yesterday morning I woke to the rain streaking sideways across the valley.  Time to hitch a lift back to Cape Town then.  The week has given me a very constructive time to discuss all thoughts of eagles, the trials and successes of the research.  The environments our respective eagles call home definitely determine much of the rest of how the research plays out.  And I find myself somewhat envious of Megan’s remote little mountain paradise (inspiring landscapes, melt-water streams, pure fresh air), while also appreciating the benefits of urban research (smooth roads, passionate public participation, and access to… well civilization).  Now I’m looking forward to getting home to the crowned eagles to perhaps see the first hatched chicks of the season.