As a photographer and videographer I have a fictional image ingrained somewhere in my occipital lobe of the ‘perfect’ raptor photograph. It involves being eye level with a flying bird (as I am unfortunately unable to fly this is quite tricky), having eye contact, good lighting on the eye, and having the bird as close to full frame as possible.
After chasing extremely skittish Martial Eagles through the Karoo with Meg (Ms. Black Eagle herself) for a week and not getting anywhere near a ‘perfect shot’, Meg suggested altering course slightly and going in search of a different species.
GPS coords were exchanged, and a week later I was getting up at sparrows to head up the West Coast. The plan was to arrive before sunrise so that I could position myself without bumping the birds off their perches. I would have succeeded but I took the wrong road, adding an extra 25 minutes to the trip and throwing good ol’ google off her ETA.
With a lot of luck and a little more light than I was hoping for, I spotted the two beauties on their perch from a way off and was able to sneak back out and around, beginning a short hike up the backside of the hill they were using for their overnight roost.
After getting to the top within sight of the eagles I set the shot up and began to wait. What a beautiful morning! I was treated to at least an hour of preening, shuffling and pre-flight prep before the female decided there was a thermal waiting for her. Her partner followed 10 minutes later and joined her in her ascent.

Camera pointed and ready, I got pretty close to the photo I was looking for! I mean, what I previously would have considered as perfect criteria have now been upgraded and modified slightly with a few tweaks required on the angle and light (I think).
But nonetheless, I left feeling extremely grateful and privileged for the show that had just been performed in front of me! The pair, no doubt confused as to why a skinny white anthropoid had been shuffling slowly towards them, were extremely understanding and I am certain did their utmost to assist me in search of a perfect shot. 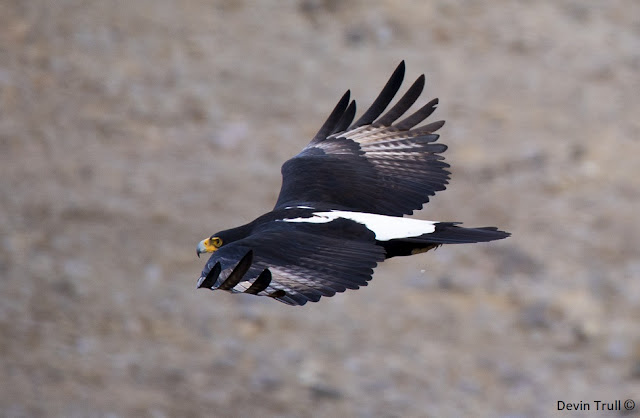 The reason I hoped to be able to get to know this pair in particular is somewhat sad. The area that they call home, where their nest exists and they spend their evenings, has been identified as a prime development site by some other anthropoid (undoubtedly skinnier and paler than the aforementioned one). On top of the looming construction phase, signs and scars of motorbike and 4x4 activity are everywhere, above, below, and all around the nesting site. Despite numerous signs existing on all corners of the large plot discouraging such anthropoid behaviour, they seem to be largely ignored and unregulated. Raptors like Verreaux’s Eagles can be extremely sensitive to loud noises accompanied by human activity, ESPECIALLY during their nesting months. They are known to abandon nest sites permanently when faced with increased activity and noise, thereby sentencing their precious eggs and chicks to a dire fate…. A scary fact for not just Verreaux’s Eagles but also other raptor species as they fight to survive in an ever-increasing anthropogenic world.