About the Black Eagle 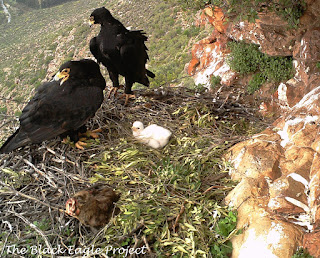 Black eagles occur through most parts of sub-Saharan Africa where mountainous habitat correlate with a high density of their main prey, rock hyrax Procavia capensis, and as far north as Israel. In Southern Africa their most notable absence is from most of Botswana and eastern Namibia where there are no suitable mountains due to the Kalahari Desert. In some areas, such as the Sandveld in the Western Cape of South Africa, the diet has become highly diversified and mole-rats and angulate tortoise are an important component of the diet (Murgatroyd et al., 2016).
Although classified as least concern (IUCN, 2011), Black eagles have been threatened by habitat degradation and land use change. In various locations in South Africa declines in breeding pairs has occurred. Most notably, in the last 20 years four to six breeding pairs have been lost from the Table Mountain chain, Cape Town (Simmons et al., 2006). This decline and those noted between the South African Bird Atlas Project (SABAP) 1 and 2  has  resulted in the classification of "Vulnerable" in the Eskom Red Data Book of Birds of South Africa, Lesotho and Swaziland (Taylor, 2015).

Nests are normally built on rocky cliff ledges or rocky pillars in hilly and mountainous regions. This preference means that the nesting sites themselves are naturally robust against human encroachment. Breeding activity commences in winter with nest building as early February. However, timing is highly variable according to region and egg laying in the Western Cape of South Africa usually peaks in June. Generally two eggs, but sometime only one egg is laid. Incubation will last 44-46 days. If both eggs hatch successfully ‘Cainism’ will occur whereby the first chick to hatch will out do its younger sibling for food and cause physical injury until death. The remaining chick will then take around 90-98 days to fledge and remain with its parents for a further 3-4 months. Once the young eagle is capable of feeding itself it will be forced out of the territory by it's parents.