I have just copied the last two weeks worth of photos from camera onto my computer. On reviewing them I have been slightly overwhelmed by all of the amazing moments I have had. No doubt it has been stressful in ways which you wouldn’t imagine, but there have been journeys that I will never forget.
The 1st of September started with the midnight arrival of Chris Laidler and Jessie Berndt and their climbing equipment. They had come up from a snowy trip to Waaihoek to help me sort out a nest camera which had been knocked out of place by a storm. A steep hike, a quick abseil, handy man fix up, an eagle feeding the chick under the eye of the lens as we walked home and back as the sunset. This all left us with happy faces and then we headed out for three days of monitoring in the Sandveld.
On return to the Cederberg I picked up Shane McPherson from the Crowned Eagle Research project. Shane had come to see first-hand the difference between the relatively urban tree nesting Crowned’s and the mountainous Cederberg eagles. We started off with a nest visit where we were treated to a prey delivery to the chick followed by an animated feeding session. The next day we took a hike up towards the well known Tafelberg to retrieve some of my research equipment. It was a stunning day which left us sitting on the peak gazing out over the Cederberg and admiring some of the unique rock formations.
I had a nest that I hadn’t made it to yet this year because of the gravel roads and distances so I wanted to finally check that out for breeding. The drive took us over to the Karoo side of the Cederberg where the flowers have brought a new hue to the mountains. On arrival the adult eagles soared low, investigating the newcomers. Once we had settled behind our binoculars and scope the chick could be heard calling and soon enough one of the adults landed on the nest and the little guy showed himself in his mottled plumage of an approximately 8 week old young eagle. 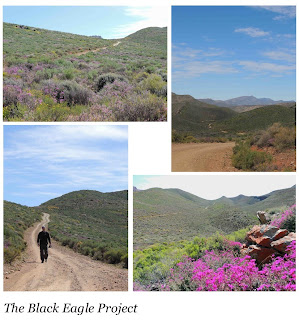 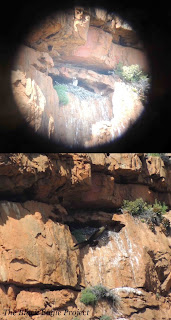 On return to Driehoek two R22 helicopters landed in the field outside my base. They were ready for the long awaited nest survey which would start the following morning. It didn’t turn out to be quite a smooth as expected. With the overnight frost the heli’s were iced up the next morning and one of them wouldn’t start. After an hour of attempted jump starting, we took off one machine down. Despite this, pilots from Base 4 Aviation flew me around the Cederberg on routes which I had planned to take in the GPS locations of nests we had found in last years survey. The following day brought the arrival of the cold front and the survey had to be cut short. Nevertheless we visited 28 otherwise inaccessible nest sites in just one day!
Fantastic few weeks!! With special THANKS to Chris Laidler & Jessie Berndt (more info on Jessie’s Martial Eagle research), IdeaWild (sponsored climbing gear), Shane McPherson (more info on his Crowned Eagle research), Cape Nature, Driehoek Tourist Farm and pilots of Base4Aviation.