As I dropped over the ridge this morning and went into the next valley I witnessed another extensively burnt area. There was an eerie silence. I stopped to listen; there was no wind and even if there had been there were no bushes left to rustle in it. I couldn’t hear the river, which would have been running deep in the valley below, and I couldn’t hear any birds. It felt for a moment like the entire place was dead. 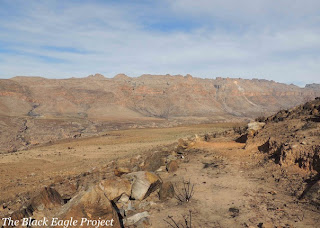 From where I was standing I knew I should be able to see the eagle’s nest, although I still had a while to hike to get to a better viewpoint. With a feeling of trepidation I raised my binoculars to check if it had made it through the fire – and to my relief it had. So I hiked on. As I rounded the next bend I came across what seemed to be a mini oasis amongst the blackened landscape. Such a small area, but with plenty of water, had burst into life. It looked slightly out of place considering the surroundings, but it was certainly something very special. 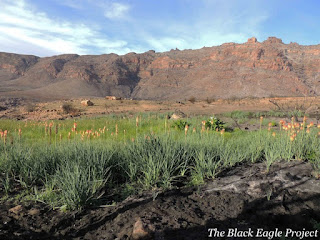 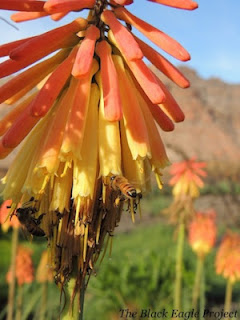 And the eagles? Well, when I arrived and set up the telescope, one was perched above the nest and the other was flying infront of it. They both then flew off and collected sticks which were then arranged onto the evergrowing nest structure. I watched them do this for about half an hour. Then they flew off to another perch where they mated and then the female returned to the nest and continued arranging it. While I was sat there I could hear a troupe of baboons further up the valley and a few dassies alarm calling. So I guess the answer is very much alive!
After this great start to the morning I went on to check the neighbouring territory. I waited a while to find the eagles but eventually a noisy crow alerted me to one Black Eagle flying high against the cliffs. The eagle kept stooping and dropping its legs. It was evidently mobbing something. I was still very far away so it took me a while to see what was happening. The eagle flew away and shortly after this I noticed it – a leopard sitting on a ledge. After a few minutes the leopard started to walk in a relaxed way, casually lifting its paws and jumping up large boulders. The eagle wasn’t impressed and brought reinforcements. Together the two eagles took turns in stooping towards the leopard but never making contact. The leopard seemed oblivious to their attempts and continued on its way. It walked behind a rock and I never saw it again but the eagles continued to keep watch over that area for the next hour which I spent watching them.

I feel very much alive too!!