The 2013 Black Eagle research season has taken off again with the deployment of two new GPS loggers. The very first Black Eagle was GPS tagged for this project a year ago in April 2012 (read more). Later in 2012 we tagged a further two eagles. One of these tags fell off, while the other has become a record holder having collected nearly half-a-million GPS fixes!
The latest two eagles were both tagged in April in the Sandveld region. They were both females and consequently far bigger than the males we have previously tagged. They both weighed in around a kilogram heavier and had the longest hallux claws I have ever measured at an impressive 5.6cm!
It is always a great privilege to observe these eagles and having the opportunity to see them so close is an additional honor. We make the process as quick as possible and release them again at the same site.


After the captures I checked on these eagles everyday for a week. The final evening before I left the area, I had my last sighting of the second eagle we tagged. When she arrived, flying in from behind the cliffs she was carrying prey. Both she and her mate had massive crops and after circling a few times she landed on a nest (which was last used in 2011) with the prey. This was the first time this year I have seen this pair land on any of their nests. Another week later I returned again and watched the first female taking sticks from one nest and moving them to another. It's exciting time times now with the imminent arrival of the breeding season. The addition of these tagged eagles will provide invaluable data for my research and I looking forwards to tracking their movements over the next year.

BIG THANKS TO ROWEN VAN EEDEN & JESS BERNDT FOR THEIR HELP: 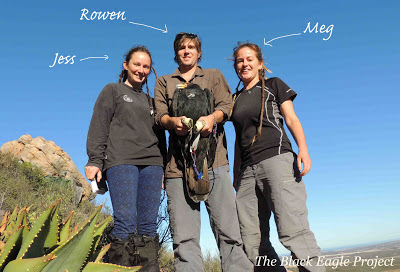