To the Karoo and Back: Mate replacement & GPS tracking an ousted eagle.

The Verreaux’s (Black) Eagle is commonly thought to be monogamous and with a pair bond that probably lasts for years (Gargett 1990, Steyn 1982). Adults are reported to show a strong fidelity to their breeding territory, but non-breeding birds, especially sub-adults possibly move significant distances (Gargett 1990). Territorial behavior occurs usually when a single intruding adult imposes upon the territory of a resident pair. This is displayed as descending aerial cartwheels with the feet of opposing individuals clasped, only releasing grip shortly before reaching the ground (pers. obs., Gargett 1990, Simmons & Mendelsohn 1993). It is not known whether or not these conflicts often result in injuries or fatalities but my observations have always ended with the resident pair chasing away the intruding bird.
So when an eagle which was equipped GPS seemed to apparently disappear we were very surprised by the story which slowly unfolded…
I began monitoring the pair discussed here in 2011; that year they bred successfully. On 6th April 2012 the male of this pair was fitted with a University of Amsterdam Bird Tracking System (UVA-BiTS) GPS device. At the time I assumed this pair were the same individuals that bred in 2011, but I now note that this is an assumption not a fact.
The UvA-BiTS tag can take GPS fixes up to every 3 seconds depending on the solar charge. The data is stored onboard and transmitted back by a ground station network which can be set up over a chosen area. In this case the ground station network was active over approximately half of the home range of this eagle, which allowed regular daily contact from the tag.
While carrying out fieldwork on 13th May 2012 two adult eagles were seen in the vicinity of the nest. They were first observed at 14:09 when one was circling above the cliff while the other was perched on the same cliff as the nest. They were also seen flying and perching together and hence appeared to be a “pair”. However, the GPS tag we had fitted was no longer there. The last GPS position that was received by the ground network was fixed at 12:44 on the same day. So either the tag fell off and this was the same pair or the eagle was replaced and re-paired in less than 85 minutes of the previous male leaving the territory… It seemed impossible…
The true story was not revealed until five months later when the tag came back into contact with the ground network which was functioning in a neighboring area of the Cederberg to download data from another tagged eagle. The eagle had left the territory rapidly after 12:44 on the 13th May 2012 and had stored all further GPS fixes onboard until reconnecting with the network. 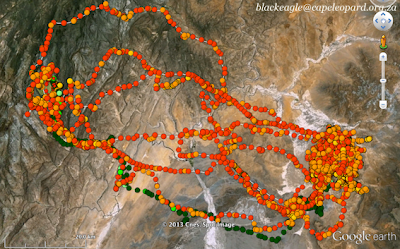 So we now know, after being ousted from it’s territory the eagle initially covered 110km in the first two days (Figure 1) and then appears to have taken up a new ‘base’ 75km away from its former territory. The data collected shows a massive expansion of the area used by this eagle following displacement. It also showed three return trips to and from the Cederberg up to the June 27th, but only once did it actually pass over the kloof where the former nest site is. We remain to see if this eagle will re-pair. During the 2012 breeding season the newly formed pair did not breed. Mate changes of Verreaux’s Eagles probably occur more frequently than we manage to observe, this data supports the idea that re-pairing is so rapid that it is difficult to detect without intensive monitoring.