The Bonelli's eagle in France 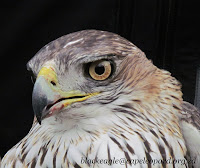 The Bonelli’s eagle Aquila fasciata is considered to be one of Europe’s most threatened raptors. In the south of France 21 breeding pairs remain and these are monitored by a National Action Plan and a banding program. I have just visited the team led by Alain Ravayrol in the Ardèche region where 4 individuals were fitted with satellite GPS transmitters.
Major threats to the Bonelli’s eagle include electrocution (94% of observed deaths have been by electrocution), disturbance (which can cause reproduction failure) and shooting and trapping. The National Action Plan has been engaged with identification of the most dangerous pylons and their neutralization, outreach to hunters and recreational land users and research to increase our knowledge of population dynamics and habitat requirements. The GPS transmitters will help our understanding of the vital habitats for the Bonelli’s eagle and their interaction with possible threats. 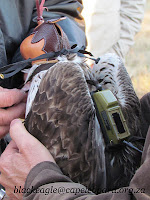 Victor Garcia works for the Spanish environmental department and supports projects in many other countries. He was present to safely trap and tag the eagles (he has experience of tagging well over 1000 raptors). Harnesses were applied as backpacks with weak links that will ultimately break down and the harness and tag will fall off.
There are many similarities between this project and the Black Eagle Project and I am very grateful for having the chance to share in their experience. Thanks to Victor and all of the French team for hosting me. I hope that in 2012 we will be following in your footsteps. 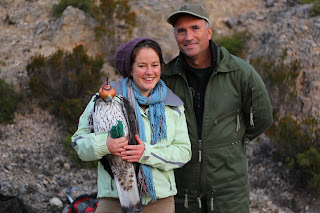