SABAP2 - South African Bird Atlas Project http://sabap2.adu.org.za/index.php
SABAP2 is the acronym for the second Southern African Bird Atlas Project and is the follow-up on SABAP1. The first atlas project took place from 1987-1991. The current project is a joint venture between the Animal Demography Unit (ADU) at the University of Cape Town, BirdLife South Africa and the South African National Biodiversity Institute (SANBI). The project wants to map the distribution and abundance of birds in Southern Africa and the atlas area includes South Africa, Lesotho and Swaziland. The second atlas project started on 1 July 2007 and will run to 2011.
The fieldwork for this project is done by hundreds of volunteer citizen scientists - they collect the data from the field at their own cost and in their own time and as such they make a huge contribution to the conservation of birds and their habitat. You can look at data collected and records for each species on the website.
Special Watch - The Verreaux’s eagle http://sabap2.adu.org.za/special_watch.php?Spp=ve
Species are assigned to “Special Watch” due to a particular concern – usually a range contraction, shift or expansion of an invasive species. The Verreaux’s eagle has been added due to a decrease in reporting rate between SABAP1 and SABAP2. It will be important now to closely monitor this and to review the status of this species. All of your contributions are important. In addition, I will be using your data to examine the breeding extent and population size of the Verreaux’s eagle in the Western Cape.
Please report Verreaux's eagles observed anywhere within the SABAP2 regions (South Africa, Lesotho and Swaziland). Please report birds repeatedly, even at the same locality. Note their behaviour, if you saw a pair or a single bird, if it was an adult or juvenile.. or if you known a nest location. Your data is important! If there is nothing particular to report, the suggested guideline for the interval between reports is five days.
> Get involved! 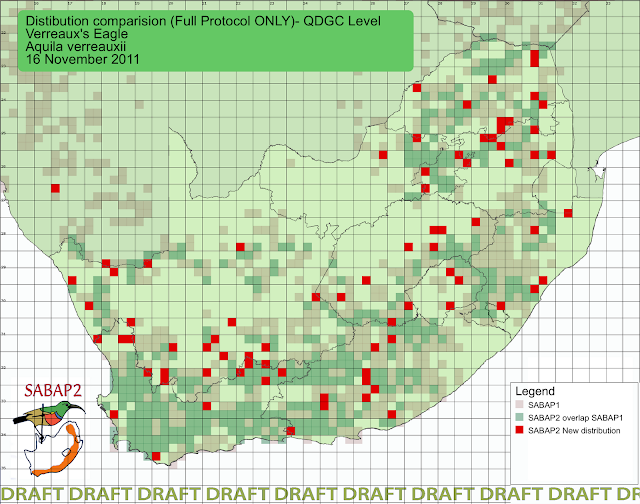 Map showing the distribution changes between SABAP2 and SABAP1